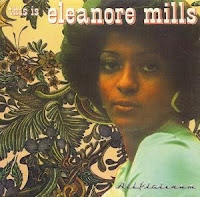 Anyone remember an LP from 1975 entitled This Is All Platinum containing various artists such as Retta Young, The Moments, Larry Saunders, The Rimshots, and one Eleanore Mills, featuring a killer mid-tempo soul delight entitles 'Stop Accusing Me'? This is the same lady with a straight issue of her 1975 mega rare LP on US Astroscope. The sleeve notes on the original vinyl album finds Moments singer Harry Ray making reference to Eleanore being an original member of the '60s group the DixieCups, which appears to be a mistake as they originated from New Orleans, and apparently always maintained their original line up (?) The plot thickens even deeper when other Moments group member Al Goodman claims that he can’t even remember recording her back in the '70s. Her debut single from 1974 starts with 'Fascinating Devastating Man,' a gentle yet appealing piece of New Jersey soul which really does grown on you with each play. The album finds a collection of sweet soul and beat ballads of the highest order despite the albums poor sales in its day, all backed by the Rimshots who were the All Platinum house band of the day and can be found on all of the labels recordings. 'I’m Gonna Get You' finds Eleanore in fine voice on a song that could have come from the Honey Cone. In 1977 Norman Connors used Eleanore on his Romantic Journey LP, where she can be heard on 'You Are Everything', a song that I have included here as bonus track. I very much hope that soul fans don’t miss the opportunity this time round to add this gem to their collections. Enjoy! http://sixtiesmotown.co.uk/
aa
aa
Publicado por Noelia Almenara en 1:18

Thanks you're the best

Wow, I remember her name from Norman Connors album. This is a great surprise to see her on her own album. Gracias.