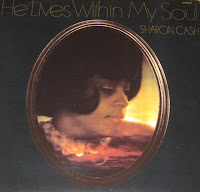 Sharon Cash is best known for replacing Edna Wright in the 1976/77 edition of female soul group Honey Cone. With this new line-up fronted by Cash, they released the single 'Somebody's Always Messing Up a Good Thing', backed by 'The Truth Will Come Out'. But Sharon Cash also recorded a couple of albums as a solo artist in the early-70s. The first one, which I am posting today, was called ‘He Lives Within My Soul’. It was arranged by H.B. Barnum and appeared on Mothers, in 1970. Her rendition of the classic 'Fever', considered by many as one of the best versions ever released of that song, is one of the highlights of the album. This track can also be found on some compilations such as ‘Soul Sides Volume Two: The Covers’, ‘Living in the Streets 2’ and ‘Even Mo' Mod Jazz’. There are also great versions of other soul hits like Sam Cooke’s ‘Change Gonna Come’ and ‘Shake’ and Otis Redding’s ‘Fa Fa Fa (Sad Song)’ and ‘Sitting on the Dock of the Bay’. Her second album ‘Sharon Cash’, was released on Playboy, in 1973, and is one of those hot items on my Wishlist! I hope you enjoy this classic soul rarity.
ee
Tracks:
01. Change Gonna Come
02. Fa Fa Fa (Sad Song)
03. Guess Who
04. Fever
05. Never Let Me Go
06. Nature Boy
07. Shake
08. Sitting on the Dock of the Bay
09. Pledging My Love
10. Sufferin’ With the Blues
11. What Am I Living For
ee
Publicado por Noelia Almenara en 1:49

I already have this superb album, but as a small token of my appreciation for your blog:

thanks for this one great singer

Wow, Thanks for the Sharon Cash album, Soul Bonanza. Much appreciated!!

Thanks to both of you!

Thank for the beautiful music !
keep up with your blog!

Sharon Cash is my grandmother. How are you all obtaining this info?

Sharon Cash is my grandmother. How are you all obtaining this info?