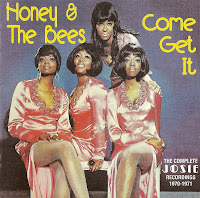 Honey & the Bees were a talented soul group out of Philadelphia, originally named the Yum Yums, and comprised of Nadine Felder White, Cassandra Ann Wooten, Jean Davis and Gwen Oliver. They changed their name to Honey & the Bees before signing with Arctic (the great soul imprint that was also home to the Soul Ambassadors). The quartet recorded around five sides with Arctic, including a few choice and expensive Northern soul pieces. In 1970, Honey & the Bees went over to Josie (best known as the home of the Meters' first three albums) and knocked out an LP for them plus another half dozen or so singles. With both labels the group had the backing of musicians that played on classic ‘70s Gamble-Huff productions. These included Leon Huff himself on piano, and Ron Baker, Earl Young, Bobby Eli, and Norman Harris in the rhythm section; Harris and Thom Bell were among those who contributed to the songwriting. As such, though the Supremes are an obvious point of comparison, they had far better production that the vast majority of girl group aspirants from the same era. Honey & the Bees spent years on the club circuit, opening for bigger soul acts in Philadelphia and throughout the East Coast before disbanding in 1973. Group member Gwen Oliver married Fred Wesley of the JB's, whom she met when Honey & the Bees opened for James Brown in 1971 (rumour has it that their headstrong, take-no-b.s. attitude eventually came into conflict with Brown's own strong-armed control over his players and he had Wesley remove the group off tour). This set compiles the material released by Honey & the Bees on Josie from 1970-1971. Most of the thirteen songs here are from their 1970 album Love, the remaining being releases in 1971. Titles include ‘Make Love to Me’, ‘Please Have Mercy Baby’, ‘Now That I Know’, ‘We Got to Stay Together’, and ‘Medley: It's Gonna Take a Miracle/Goin' Out of My Head/Hurt So Bad’ and ‘Help Me (Get Over My Used to be Lover)’. http://soul-sides.com/, http://www.allmusic.
uu
Publicado por Noelia Almenara en 2:04

Thanks Nosi! This is a much better copy than the one I had. This is an excellent album. :)

thank you Nosi, my life would be so much poorer without your blog and the music such as this that you post for all of us! you are a treasure!

Thanks for sharing this compilation