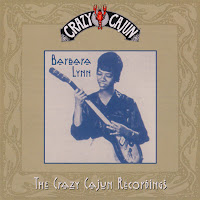 A Beaumant native, Barbara never wanted to be anything but an entertainer. Born January 16, 1942, she started learning her craft on a cheap Arthur Godfrey ukelele and was leading her own regional band before she graduated from high school in 1960. Nicknamed "the black Elvis" by friends, Lynn was nurtured by Clarence "Bon Ton" Garlow, a local bluesman and DJ. By 1962 she and Garlow attracted the attention of Huey Meaux, who saw her perform at the Ten Acre Club outside Beaumont. Meaux brought her to Cosimo Matassa's studio in New Orleans, hustling a deal with various "indie" labels. According to Matassa, Meaux unfortunately failed to connect so Cosimo worked out a deal with Harry Finfer at Jamie Records. The first single, Barbara's own ‘You'll Lose a Good Thing’, topped the R&B charts and raced to #8 on the pop Top Forty in the summer of 1962. She had several additional pop charters that year, in 1963 and in 1964 when the Rolling Stones covered her ‘Oh Baby (We Got a Good Thing Goin')’, a modest hit for Lynn though it lasted two months on the charts. It's amazing that, with such credentials established before her 23rd birthday, Barbara Lynn didn't become a superstar, but for some reason she missed her train to glory. Instead of becoming a household name who released an album every year or so, Lynn's recorded output from 1962 to 1986 is limited to her debut album on Jamie and a 1968 "comeback" effort on Atlantic, source of her last pop chart entry, ‘This Is the Thanks I Get’, in 1969. And then, at the age of 27, Barbara Lynn dropped off the radar screen of chart records, major labels, hit singles and national exposure. While living in Los Angeles Lynn occasionally appeared at local clubs before returning to Beaumont, Texas to live and resume her recording career after her husband's death. She was given a Pioneer Award by the Rhythm and Blues Foundation in 1999. This set presents a good picture of a versatile soul-blues singer on top of her form. In addition to showcasing some of her own material, the Crazy Cajun Sessions from the early '70s also feature Lynn renditions of such hits as The Casinos' ‘Then You Can Tell Me Goodbye’ and Hank Williams' timeless ‘I'm So Lonesome I Could Cry’ as well as ‘Daddy Hot Stuff’, a selection obviously influenced by Jean Knight's 1971 pop hit. There are also four alternate takes of some of her best known tunes, such as 'I'm a Good Woman', 'Nice and Easy' and 'You Left the Water Running'. Just sit back and enjoy the work of this vastly underrated artist from the fertile Gull Coast! Partially taken from the original liner notes and http://en.wikipedia.org/.
aa
Publicado por Noelia Almenara en 1:13

Great offering! Love this site, thank you for your generosity and time spent working on these treasures.

Thanks Nosi! Another great compilation for sure!